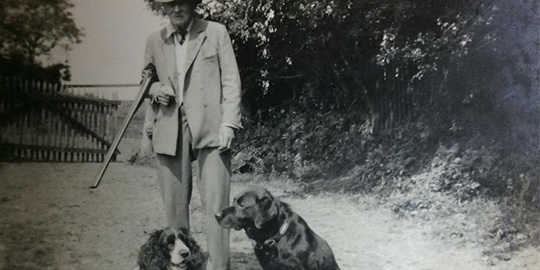 This month our blog comes from Volunteer Librarian Jeannette who has given a piece all about the four-legged friends of the big house, the Abbot’s Hall dogs.

Under the trees, on the east side of Abbots Hall, against the garden wall are four small tombstones, indicating the graves of four pets. They date from 1900 to 1912. These are only four of the many pets known to have lived at Abbots Hall.  I say ‘pets’ but in many cases they were also working dogs.

The Longe family had many dogs over the years, many of them pets, such as the Pekinese dogs, Sing and Song owned by the family in the 1930’s. However in 1913 the Cambridge Independent Press carried a report of a Mammoth Show held at Cambridge where Mr H.D. Longe received 1st place in two classes with his sporting spaniels. He held ‘shoots’ at Abbots Hall and the dogs may well have been used at these events.

John Hayward, who owned Abbots Hall from 1877-1903, bred fox terriers. They were probably housed in the fenced off area attached to the stable block. Mr Hayward used to hold coursing events on the cricket ground (approximately where Asda is today) and there are reports of this in the Ipswich Journal. One of the coursing events was called The Abbots Hall Stakes. Mr Hayward was also very involved with fox hunting. He encouraged foxes to make their homes among the osier beds.

John Edgar Rust, a Stowmarket man, who owned Abbots Hall from 1803 until his death in 1840 had a pack of greyhounds. He belonged to the Newmarket Coursing Society, and over the winter months took his dogs there for the coursing events between 1821 and 1830. At least twenty six dogs have been identified from newspaper reports of these events. All the dog’s names began with the letter B. They included Blackberry, Benedict, Barefoot and his favourite, Baron, who won at least two cups and a number of matches at Newmarket. After one event he was offered £100 for Baron, over £4000 today, which he refused. Baron had his portrait painted, as noted in a later newspaper item when contents of the house were being sold.

These are just some of the dogs known to have been at Abbots Hall, however there were probably very many more over the centuries.

Want to know more about Abbot’s Hall? Pay us a visit Tuesday-Sunday 10am-4.30pm or visit Jeannette in the library Wednesday’s and Thursday’s