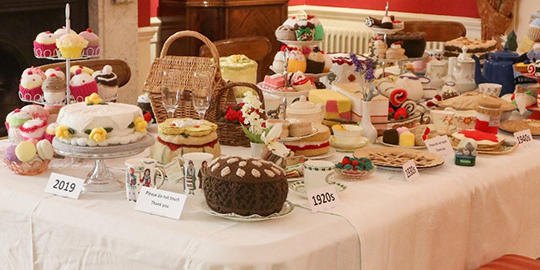 Warm and a little bit itchy is what comes to mind for most when thinking about a knitted woolly jumper or scarf.  Food is not one of the first thoughts for most. However, if you were to wander through the corridors of Abbot’s Hall you may very well come across an overflowing banquet of woven treats. From French fancies to the most delicious looking strawberries that – I imagine – would leave a rather fluffy after taste.

No, we haven’t gone mad, or recently taken up knitting at the museum, we are celebrating 100 years of the Suffolk East Federation of Women’s Institutes. We have partnered with around 60 WI’s to create the ‘100 Years of Tea and Cake’ exhibition. The exhibition is laden with fuzzy felt fishes, bulging Battenberg’s and curvaceous cupcakes, all that look good enough to eat. I would, however, advise against it, as many talented women have spent many hours creating these amazing artworks. They are all being displayed in our partnership exhibition which aims to celebrate, tell the story and history of the Women’s Institute in East Suffolk, from their founding in 1919 through to the present day.

Having been involved with the construction of this exhibition we decided to look into some of the objects on display and just how they connect with the WI.

One of the bottles on display in the exhibition is marked with the words ‘Booty and Sons’. This is the name of the local confectioners, dairy producers and greengrocers. From the 1930s Booty and Sons delivered milk in these bottles from the family farm at Timworth, two miles north of Bury St Edmunds, Suffolk. Their shop was located on Etna Road in Bury St Edmunds, Suffolk, and had the catchphrase of ‘The milk’s yours, the bottle’s ours’.

Some may think that the only link for the WI and milk bottles would be for cups of tea it does have to do with brewing…brewing up a storm.

WI members have raised awareness of the inequality between the retail and farmgate price of milk. In 2007 the National Federation of Women’s Institutes launched the ‘WI Great Milk Debates’ to highlight the challenges faced by dairy farmers and the importance of the industry to the economy, countryside and environment. They worked alongside the National Farmers’ Union and 100 debates took place. The WI gave voice to the strong feelings of the nation regarding the dairy industry and are still campaigning today.

Something nearly every house will have, with some pages hanging on by a thread, while others are hardly opened. Recipe books play a large part in life as well as in the WI.

Cookery books were produced by the WI from the early days and were a growing success, so much so they made it a standalone business venture.

Through their cookbooks, the Women’s Institute has preserved traditional recipes and cooking methods. However, some of the earlier editions needed a strong stomach. One lady suggested a recipe for ‘brain cakes’… sheep brains boiled in milk! Thankfully more modern editions have stuck with more accessible ingredients.

The books are produced both nationally and locally and are often sold to raise funds for the WI or make a contribution towards their latest fundraising campaign. Recipes were also published in their publication Home and Country, which included well-balanced meals for the family as well as food processes such as bacon curing. Today the Women’s Institute also uploads some of its cookbook recipes onto its website, encouraging those ‘new to cook to have a go’ and is committed to ‘improving the nation’s diet and health particularly regarding food and sustainability.’[1]

Alongside these publications the 2011-2013 campaign ‘Lets Cook Local’ targeted young and disadvantaged parents from all over the country, running six-week courses on cooking using locally sourced ingredients led by trained WI volunteers.

The ladies of the WI have many great skill sets and in 1939 the Produce Guild was established to expand their talents further.

Guilds in the Women’s Institute are a group in which members can pay an additional small subscription to be a part of.

With the prospect of war looming the Women’s Institute prepared for the worst and with a grant of £500 from the Ministry of Agriculture the WI set up the ‘Produce Guild’. Members would be given this badge, signifying their part in the ‘Produce Guild’ and they would travel around the country and teach other members about intensive farming techniques. They would supply cheap fertilisers and plants, encouraging food production and self-sufficiency. Many members of the ‘Produce Guild’ were also appointed ‘food leaders’ in their community, along with NFWI leaflets they would teach people how to spread rations further and to feed a family a balanced diet.

This is the “Dixie Can Sealer”, is a hand-powered canning machine for sealing tins.
It was used for home preserving, fruit, vegetables and sometimes meats. This particular machine was used by the donor’s mother in the 1940s in Bury St. Edmunds, Suffolk.

The machines were popular and in Cyril Grange’s book ‘The Complete Book of Home Food Preservation’ he promotes their use by saying:

The Dixie Canner Company of Georgia, U.S.A., where effective from 1895, however, this particular example is marked “Made in England” so was presumably made here under a Dixie licence to their design. They were expensive but during World War II they were subsidised in the UK.

Grange also states in his book:

“A hand-sealing machine has to be purchased… this costs up to £9, it will last a lifetime and costs nothing for replacements as there is nothing to wear out quickly.”

When soldiers went to war with their weapons of guns, the WI’s war weapon was the canning machine.

Federations bought canning machines to loan to Institutes and the Americans sent 500 Dixie Hand sealers to England. The Gloucestershire Federation got 22 machines from Canada, followed by 10 more in 1942.

In 1930 there was mass produce of plums in Cambridgeshire. The WI got to work and more than 216 cans were produced by Eversden WI, all made possible by using their hand canning machine.

The WI set up canning clubs where cans would be coded to denote the owner and contents. In 1940 West Sussex WI had a canning day.

During both World Wars, WI members grew and collected fruit and vegetables, helping combat food shortages. Canning machines enabled members to preserve foods to keep and sell. Between 1940 and 1945 over 5,300 tons of fruit was preserved.

When asked how food and its production plays a part in today’s WI, Liz Quarmby, WI Advisor said “[in] the WI various aspects of food …have been … acted upon. A good cup of tea and a delicious homemade cake has been the stalwart of any village event and the WI has a reputation for this and continues today.” Through such simple objects, we have learned a wealth of knowledge and how diverse the WI is. These women have had an incredible 100 years, serving the community and making a difference. We are confident the next 100 years will be just as revolutionary.