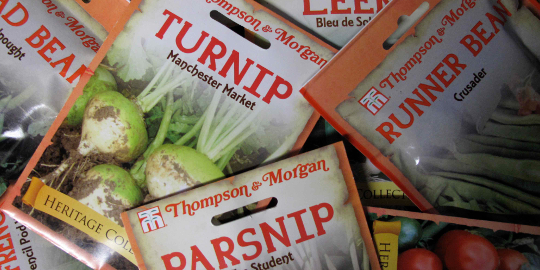 It’s always lovely to receive post, most especially a seed parcel! Thompson & Morgan have been very generous towards the Walled Garden, offering a discount on our order which arrived this month. Based in Ipswich, Thompson & Morgan have a great selection of heritage vegetable seed. This is ideal for the Walled Garden as we aim to grow a wide selection of old varieties similar to those that might have been grown in the garden originally.

Other heritage varieties we have been introducing to the garden this month have included a selection of gooseberry bushes. Perennials of Distinction based in Rougham near Bury St. Edmunds have a fantastic selection of gooseberries, having once held the national collection. Varieties planted include Lancashire Lad (1815) a mid-season to late heavy cropper with red fruits, Leveller (1851) a large yellow/ green desert variety, Careless (1852) a large culinary green variety and Langley Gage (1877) – a desert silvery-white gooseberry.

These have been planted along the west-facing wall next to the rhubarb and autumn fruiting raspberries also planted this month. Below, Tom, Jo, Terry and Sue spacing out and planting the raspberry canes.

Ipswich Community Garden has kindly donated seed potatoes to the Walled Garden (sourced from the Potato day held at Stonham barns). The East Anglia Potato Day is an annual event organised and run entirely by volunteers from local organic gardening groups. This year it boasted over 90 varieties for sale as well as a seed-swap table, second-hand bookstall, tool stall and compost advice.

Salad Blue (1900), Highland Burgundy (1936), Shetland Black (pre-1923) Duke of York (1942) and British Queen (1894) are just some of the varieties we will be growing this year. Laid-out in fruit boxes we are letting them ‘chit’, a method of preparing the tubers before planting by placing them in a light cool place and encouraging them to sprout.