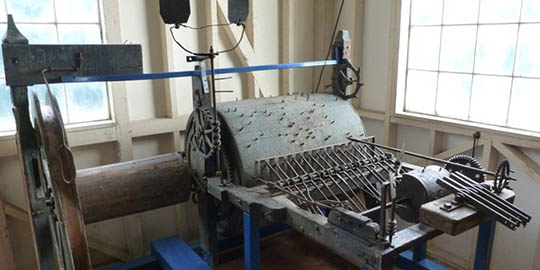 “Community time” – The Stowmarket church clock and its role in society.
Our entry for Suffolk Museums Object of the Year contest 2016.

The Stowmarket church clock with its Meccano-like appearance is an object that intrigues and fascinates visitors to the Museum of East Anglian Life. The story of the clock is one of community inclusion and progress. Dating from 1620, the clock announced the time through its carillon of bells, as it didn’t have a face.

The carillon and clock mechanism are now separate, but would have been connected to chime the time and a selection of 5 different hymns. The bells shared both the time and the act of worship with the people and landscape which would help create and sustain Stowmarket’s economic force in the centuries to come.

In 1837, a clock face was added to the outside of the tower. A smaller face on the same mechanism was mounted inside, providing a physical link between the internal structure and the role of the church in the wider community – three centuries earlier, the church of St Peter and St Paul welcomed the congregation of St Mary’s church following its demolition, uniting two communities in the church of St Peter and St Mary as we know it today.

The clock is still wound at the start of each day, and we are proud that such a long-standing symbol of unity between town and country, agricultural and economic strength still ticks as it marks the passage of time in the Museum’s Boby building,

The Boby building is on the top field of the Museum’s main site and is open during the high season to paying visitors.

Vote for the Church Clock to be Suffolk Museums ‘Object of the Year’ at http://suffolkmuseums.org/museums/news/object-of-the-year/