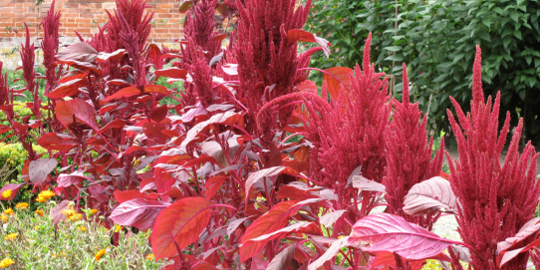 This month we finally plucked from the ground the most talked-about plant in the garden – the Red Amaranth (Amaranthus cruentus). Seen in the garden next to marigolds, french beans and globe artichokes, it complements whatever it is planted with. With its striking red foliage and flower growing up to 6 feet tall, it is a head-turner. Originating from Central and Latin America its leaves and seeds have been used for centuries. The young leaves can be harvested and used in the same way as beets, Swiss chard and spinach. The seeds (technically Amaranth is a seed, not a grain) can be collected and used as a pseudograin like quinoa, or ground down to make flour. A relative of the garden plant ‘Love Lies Bleeding’, Red Amaranth can also be used to produce a deep red dye. This close-up shot of a leaf shows how intense and luminous this colour can be – what a stunner!

With a keenness to perpetuate any plant successes this year as well as continue heritage lines of vegetables, we have been collecting and storing a lot of seed this month. Red Amaranth (Amaranthus cruentus), Giant-headed sunflowers (Helianthus annuus), Fennel (Foeniculum vulgare), Marigolds (Calendula officinalis) and an assortment of beans are all getting the seed ‘shake-down’. The greenhouse has numerous flower heads hanging from a line suspended along with the ironwork – drying, ripening and collecting the valuable seed. We have also printed some seed envelopes so that any excess might be sold to help contribute to the Walled Garden project.

Also this month we have planted-out garlic, broad beans and spring cabbage. Autumn has meant a shortage of produce so we have decided only to run the stall outside the Osier Café during Friday lunchtimes when we have enough vegetables to sell. Kale, lettuce, chard, spinach and herbs persist, and it won’t be long till we have a crop of Jerusalem artichokes, Scorzonera & Salsify.

For those that took part in the ‘sponsor a tree’ in the Walled Garden during April 2012, you may want to visit the garden to collect any apples that are ready for picking. They are a mixed bunch, with varying degrees of productivity and vigour, but some sponsors might be pleasantly surprised. This winter I intend on carrying out formative pruning on the apple and pear trees to encourage the espalier form for which they were intended. Following this initial training, the productivity of the trees may be effected so sponsors should be aware of this and hopefully not be alarmed come next autumn.