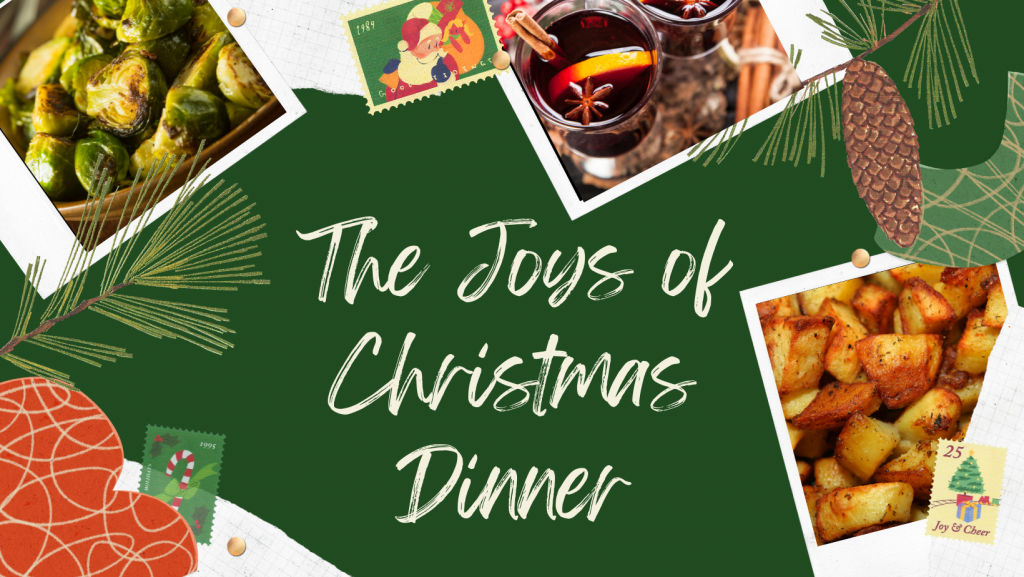 The Joys of Christmas Dinner

The Christmas season has arrived, and the museum is looking very festive and feeling rather cold! But alongside the winter weather comes a range of festive food, which some of us may have been waiting all year to get a taste of once more. Honey roasted parsnips, dates wrapped in bacon and buttery Brussell sprouts are just a few of Christmas dinner dishes which could be enjoyed this December, as well as mince pies, gingerbread men and a variety of yuletide themed chocolate that flood the supermarkets. Let’s explore some of the food that makes Christmas dinner so special and hear from our own team at the museum about what foods they enjoy most. Just what is it that we love about the Christmas season? Is it the songs? Is it the wintery weather? Is it the delicious food? or is it simply that we get together?

In the UK, the Christmas feast has its roots from before the Middle Ages, but it’s during the Victorian period that the food we now associate with Christmas began to take shape.

One food that is often enjoyed at Christmas dinner today is a roast turkey. According to legend, the first appearance of turkey on our festive tables was in 16th century England, with King Henry VIII being the first monarch to have one for Christmas. Previously other forms of roasted meat such as beef and goose were the centrepiece of the Christmas dinner, but as families became larger a goose just wasn’t big enough and cows were needed for their milk.

Traditional Christmas spices such as ginger, nutmeg, cinnamon and clove are still very popular in our festive foods today, but from where did this link originate? Spices started to become popular in England in medieval times when soldiers and traders brought them back from distant corners of the globe. Their rarity made them very valuable and expensive. In this way, they were saved for only the most important celebrations, such as Christmas. There’s no doubt that mince pies, mulled wine, sausage rolls and Christmas pudding wouldn’t be the same without their fragrant flavours.

During my time as a Museum Futures Collections Trainee, not only have I been able to get to know the various members of staff at the Museum, but have also learnt what their favourite part of Christmas dinner is, because as you know, we all have one! The tricky part is choosing which one is a cut above the rest. I wonder, do you think you could choose one part of Christmas Dinner you love the most?

Both Kickstart Photography Trainees Jools and Elizabeth rate pigs-in-blankets very highly alongside Visitor Services Officer Catherine, but for other team members the meat at Christmas Dinner can’t compare with the abundant variety of vegetables. Skills for the Future Trainee Eve chose the roast potatoes, but only when they are really, really crispy. Our Curator Kate also appreciates the root vegetables of the festive season, settling on honey roasted parsnips, and for Engagement Officer Laura braised red cabbage has a special place in her heart, whereas her partner favours bread sauce. For Conservation Kickstarter Trainee Kayleigh, it was an easy question, with the easy answer being batter puddings. Not sprouts or pigs-in-blankets, batter puddings every time. The Visitor Services and Marketing Manager, Chloe, too found a way to mark one food a step above the rest. For her, a well-done turkey is the protagonist of the festive feast. And she makes a convincing argument as to why, saying how we don’t have a turkey as often other foods like as roast potatoes, and therefore having turkey feels more special and, for some, a turkey could make or break a Christmas meal. Although having said that, she admits that she is also a big fan of a roast potatoes.

For the sweeter-toothed members of staff, Christmas Pudding is king. For Visitor Services Officer Darren, Christmas pudding was first to spring to mind, however after more thought poached pears are also a winning dish in his eyes. Long-standing volunteer David had no question about it. His wife makes their Christmas Pudding, and he knows that it just tastes great; he doesn’t even have sweet tooth. Both Engagement Officer Laura and her family, and Collections Volunteer Simon too sing its praises.

For Kickstart and Conservation Officer Tom, Christmas is a bigger celebration on Christmas Eve, when he and his family enjoy a traditional seafood meal in respect of their Italian heritage, and this is the most special dish for him. On Christmas Day, they’ll enjoy their meal quite late in the evening with a roast turkey rocking centre stage.

Perhaps it could be said that Christmas dinner is a feast that can be enjoyed by all. With such a variety of flavourful dishes and scope to make each dish your own taking influences from friends, family, chefs and abroad, it can cater for all.

Food has always brought people together and Christmas is a great time of year to catch up with our loved ones and relive traditions. Throughout the West Country in places like Devon and Somerset, residents used to have a Christmas tradition that was similar to the original yule log. This does not refer to the chocolatey dessert, but to the Celtic Pagan tradition of burning a decorated log to celebrate the Winter Solstice. This tradition was also enjoyed in Scandinavia where a family would select a log to burn around Christmastime, done with the condition that anyone in a household where the ‘yule’ log was burning would not be able to do any work until it was entirely turned to ash.

In the West Country, this practice would see a faggot — a bundle of sticks — bound with nine green lengths of ash bands burnt in a hearth on Christmas Eve. While it burned, those in attendance would sing songs, enjoy dancing and drink in celebration. It seems a simple and thoughtful way of making sure to take a break from the mayhem that Christmastime can stir up, and ensure we find joy in the food, friends and family that we share it with.

Museum Futures is The British Museum’s latest Skills for the Future training programme. It has been generously supported by the National Lottery Heritage Fund.