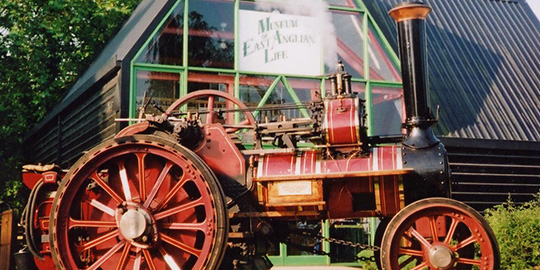 I opened the curtains to find the early morning sun shining down. This was good because today was going to be a very special day.

Making my way into Stowmarket at 8am I was aware that some of the Museum’s volunteer team would already have been working hard for many hours – preparing a steam engine, washing and grooming horses. As I pulled up at the Museum, I was met with the sight of the newly restored ‘Empress of Britain’ Burrell Steam Traction Engine, glistening in the morning sun. Today was the day when all the weeks of hard work from people both in and outside the Museum would pay off – today was the day that the Queen would meet the Empress!

With tightened security throughout the town, it was necessary for the engine to be moved into position early. We caused more than the normal confusion for the rush hour traffic on Finborough Road as we broke all the traffic rules and drove the Empress the wrong way through the traffic lights, to take her place in the Market Square.

As visitors began to line the streets, Museum staff and volunteers brought the Sainsbury wagon from our collection down past the shops to place it beside the engine. This would not only be displayed with our two Suffolk Punch horses in front, but also act as a collecting point for the huge number of flowers that would be given to the Queen on the day.

By now, the time was 10am and I had to be on the move. Dashing back through the Museum’s Home Close area, I saw the volunteer Horse Team putting the finishing touches to ‘the boys’ – Remus and Byron, our Suffolk Punch horses – ready for their Royal meeting. On a nearby table sat a silvery coloured bowl of carrot sticks that the Royal party would feed to them later. Everyone was looking splendid and there was a buzz of anticipation in the air.

Having changed into my posh frock it was time for me to leave. I had to get to Bury St Edmunds because I was one of the lucky few that had been invited to attend the champagne reception at the Athenaeum. For me, this was a once in a lifetime opportunity!

As we stood by an upstairs window of the Athenaeum watching the crowds on Angel Hill, I was aware that the Museum staff, volunteers, horses and engine were probably being greeted by the Royal party in Stowmarket at that very moment. What seemed like only minutes later (but must have been at least an hour!), there was a loud cheer from outside and a hush fell over the 150 or so guests waiting inside. The Royal party had arrived! The Queen and the Duke made their way around the guests – including me – greeting each with a handshake and a few words. The whole time I was aware of the noise made by the excited crowds outside, and as the Queen and Duke went over to the window to wave, the cheers grew louder and a sea of red, white and blue flags filled the air.

After this, the Royal Party left us and we were ushered downstairs into the beautiful main hall of the Athenaeum. Here, we were seated on long tables – to my left was the Mayor of Stowmarket, Keith Scarf, whilst to my right was the Revd John Pugh.

The television cameras and photographers hovered around the edges of the room and it wasn’t long before they leapt into action. A hush fell over the room as we all stood for the entrance of the Royal Party.

While we sipped glasses of Chimneys House Champagne, the Queen gave a short speech about her Jubilee year and visit to Suffolk, before inviting us to join her in a specially prepared Suffolk meal.

We were treated to Smoked Suffolk Chicken with Cured Ham and a Sun Blushed Tomato Compote followed by Fillet of Suffolk Lamb with Roasted Shallots, Dauphinois Potatoes and Fresh Market Vegetables. It was cooked to perfection and the lamb just melted in the mouth.

Before desert was served, the Royal Party left us. As the doors closed behind them, the chatter in the room got louder and we all tucked into a Rich Dark and White Chocolate Mousse. It was truly exquisite and I hope the Queen was able to take hers home with her!

The conversations around the tables continued and we ended the meal with coffee and Handmade Chocolate Petit Fours. Aware that I was unable to eat anymore if I tried, I returned to the Museum to find out how the day had gone. The atmosphere was super with everyone sharing their own memories of the day and special stories – particularly one about the Queen’s carrot sticks that I’ll share later!

It seemed to me that this was a day that the Museum was unlikely to experience again and was certainly not something that I had expected to do when I became the Assistant Curator at the Museum of East Anglian Life!