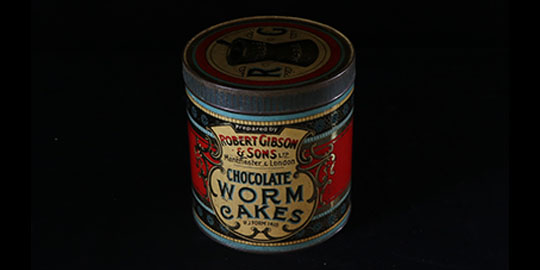 Suffolk Museums Object of the Year 2019

After a hard-fought public vote, our entry for Object of the Year was declared the winner. Read all about why we chose the Chocolate Worm Cakes below:

For a tin so elaborate and eye-catching this item is in fact something a lot less glamorous than you may expect!

With an intriguing name and a curious and attractive design, the theatrical label initially suggests it may be a practical joke, something to fool your friends with! Could it really be, as the name on the tin leads you to believe, a cake containing worms as the main ingredient?!

The ‘Chocolate Worm Cakes’ were in fact used to treat tape worm infestations in humans, especially children. Individual cakes would be purchased straight from the tin and therefore it would have to be eye catching on the shelf.

It’s strange to have such a striking design on a tin which contains a medicine to treat a rather unpleasant illness. The object evokes a time before the NHS, when health standards were poorer, and where a local pharmacist or general store was heavily relied on to treat ailments, which is less common today.

This object deserves to win because it makes people stop and think – perhaps turning a few noses up to start with.

Though this tin cannot be dated with any precision, it provides a solid link to the local businesses in our area and gives us an insight into people’s lives of the past… warts and all!