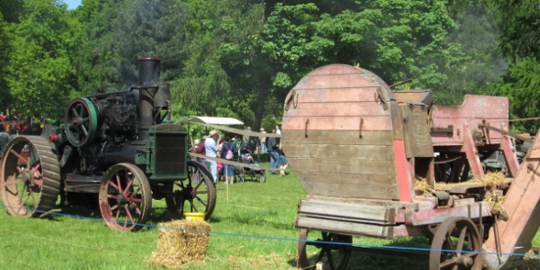 The Steam Team are often seen around the place bathing in oil and hammering rust as well as maintaining and using  the large collection of engines and machinery the Museum has to offer visitors. They also head off-site periodically with some of the Museums treasures and make appearances at local rallies. The first venture out this year was to the Woolpit Steam Rally in early June. Both of our Walsh and Clark Victoria ploughing engines were taken to the rally site by low loader ready for action. This event has a regular slot in the Steam Team diary so a well rehearsed routine clicks into action for both the rally days – like getting the kettle early on for a cup of tea!

Both the engines were in action during the rally. One was taken into the parade ring on four occasions and managed to make the journey each time without breakdown, which was commendable, if a little surprising! It was also belted up to an Innes Chaff Cutter for a while to chop some straw. The chaff cutter makes a good demonstration but the old machine has a tendency to rattle itself to pieces, which this one duly did after a while and had to be withdrawn from service for repairs. The other Walsh and Clark spent the weekend driving a Thrashing Drum and Elevator which made a good display for visitors to see how corn would have been thrashed out in the early part of the 20th century. Unfortunately, one of the cam shaft lobes on the Walsh and Clark became worn during the second day of action so some repairs will be necessary once we get the machine back to the workshop.

Woolpit is a great rally, well organised and enjoyed by visitors. The weather this year was particularly good making for a fine day out.

Please note in your diary that the Steam Team will be in the Museum doing a bit of fettling this Sunday (9th June), with plans afoot to thrash the Museum’s home grown wheat crop during the Countryside at War event in Stowmarket in September, so there is plenty more action to come.