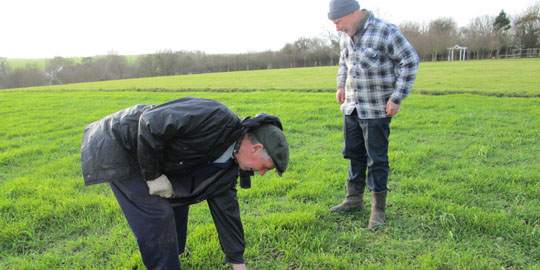 As we look to the start of our main 2015 season, the Steam Team have been giving some thought to how we work our demonstration land and what crops we should be growing:

The small scale farming practices carried out by the Steam Team at the Museum are an attempt to build up to a traditional four crop rotation used in Suffolk for many  years as a way to keep the land in good condition. It is our hope to demonstrate farming techniques that were used for many years and were the forerunners of today’s modern farming. We aim to show our visitors what rural life was like in the fields in the early to mid 1900’s, whilst being aware that in the small setting of the museum we cannot cover all the changes that have taken place during that time but we would, at least, like to give a taster to our visitors.

At present, our demonstration land is divided into three plots (which by definition are not going to give us a four crop rotation!) where we are concentrating on getting the land free from weeds but not too clean. This system was invented before selective weed killers were readily available so it is not our intention to see completely weed free crops. We would expect to see the odd thistle and a few poppies showing their faces, so you can expect to see us hand pulling weeds at some point as would have been the practice in the time period we are trying to show.

As we progress, we intend to work on four plots which will allow for the four crop rotation to work. One of these will be a fallow (i.e. ploughed and harrowed but left without being sown) which allowed farmers of the time to control weeds by cultivation and will allow us to use the plot for demonstrations during the time when the other three plots have crops growing in them. We have also planted winter wheat in another plot and vetch seed as a form of green manure in another which we hope to cut and plough back in during early spring before it gets too woody.

With some good interpretation boards we hope to offer the public a chance to understand post-war farming and where our food comes from, whilst possibly enabling some hands on experience of what it was like to work on a farm when the job was still very labour intensive.

We want to make everything we do from planting to harvesting  and thrashing the crops on the farming plots into demonstrations for the public to see. At the moment the farming is a work in progress and needs to be linked to other activities on the site to tell the full story but we are sure with fair weather and some hard work we can make it an interesting part of the museums offer for our visitors.

Barry Salmon and Peter Gibbs, Volunteers from our Steam Team