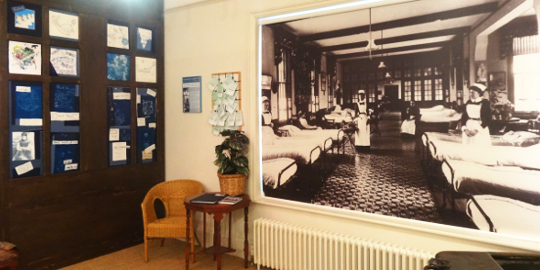 Home / Blog / St Audry’s Project- Telling it like it is

The St Audry’s project is a Comic Relief funded project exploring the history of St Audry’s Hospital and drawing on people’s contemporary experiences to consider how attitudes to mental health have changed. The blog below comes from artist Juliet Lockhart who has worked on the St Audry’s project

St Audry’s Hospital situated in rural Suffolk closed its doors in 1993.  Originally a workhouse, it became the Suffolk County Asylum in 1832.  Countless people passed through the hospital, for many it became home, and they left behind their stories, some of which are recorded, the majority lost.

In 2012, a project was set up by the Museum of East Anglian Life to explore the hidden history of St Audry’s.  The Museum, alongside Felixstowe Museum and the Suffolk Record Office, were recipients of the hospital museum collection and archive when it closed.  ‘Telling it like is the story of a psychiatric hospital in Suffolk’ engaged with mental health service users to create work to accompany a permanent display in Abbot’s Hall, part of the Museum.  The project also explored and recorded people’s emotional connections with St Audry’s site.

Artist Juliet Lockhart worked alongside the Museum to deliver a series of textile, stitching and creative writing workshops.  From these workshops came a wealth of material that informed two artworks, now on display in Abbot’s Hall.

The workshops were designed so that people could participate in as many as they wanted to.  Some came just once, others were regulars throughout the project.

Using the collection housed at the Museum as a starting point, people began to explore issues around mental health through art and writing.  Words such as ‘lunatic’ and ‘asylum’ were discussed and ideas sprang from associated thoughts.

“lunatic should be accepted as a word from history that is now outdated”.  F.M.

The first textile pieces produced were a series of images and texts using cyanotype fabric prints.  These distinctive blue and white prints were created by designs drawn onto acetate which were then used in a similar way to a photographic negative.  The acetate was placed onto the chemically treated fabric, exposed for a few minutes in sunlight and then rinsed in plain water.  During the process, the fabric undergoes several colour changes before the original image appears in white against a blue background.

The images produced were emotional responses to objects in the Museum.  The Black Shuck is part of the folklore of East Anglia.  A ghostly black dog is said to roam the highways and byways.  A terrifying sight, a beast associated with the Devil and a harbinger of disaster.  For the artist of this piece, The Black Shuck represents her depression, sometimes it is overwhelming, at times it shrinks but it is always there hovering, ever-present.

Simple printmaking techniques were also explored during these sessions and some of the thoughts that came from discussions around mental health were incorporated onto the fabric pieces.

The creative writing workshops took as their inspiration, the work is done in the textile sessions.  Through a series of writing prompts and visual images a selection of poems emerged.

This tree has no root system.

The branches are fragmented

On a road to nowhere.

Leaves on branches that bear no fruit or future,

malnourished waiting to fail and die.

The leaves shake as if nervous with a gentle breeze.

The branches sway as a large feather

to the white clouds above.

Clearing a passage to the sky

so I can finally rest in pieces.

After the ten workshops had ended there was a pile of images, words, paper and fabric that needed to be brought together somehow.  From the outset of the project, the work produced was always driven by the individual.  There was no set rule so that each person could respond to the themes however they wished with the guidance of Juliet Lockhart.   This meant that the finished pieces differed in size, content and execution.  Ruth Gillan, the project manager took inspiration from a photograph of a ward in St Audry’s when it was first opened.

A replica of part of the room divider shown in the photograph was commissioned with the idea that the panes of glass would be replaced by a series of fabric panels.

A series of sewing workshops took place in the splendid dining room in Abbot’s Hall.

The various pieces of text and images were stitched, appliqued and embroidered before being joined together as crazy patchwork.  Crazy patchwork uses an irregular piece of fabric combined to create a haphazard design.  Crazy patchwork is usually embellished with embroidery, as well as buttons, lace and ribbons.  It is extremely creative and free-flowing and so fitted in with the ethos behind the artwork.

Many of the panels were worked on by more than one person.  Pieces of fabric were passed around for someone to stitch words on, someone else to add a border and someone else to embroider.  Some of the pieces went home to be worked on and some to Woodlands, the mental health unit at Ipswich Hospital.  Fabric and threads were confined to a blue palette to create unity.

Finally, the crazy patchwork was mounted onto wooden frames and fixed into the wooden door frame.

Juliet Lockhart worked on the second artwork to be installed.   Ruth Gillan had sourced an original metal hospital screen, the kind that was used to provide a modicum of privacy in a crowded ward.

She began her research by visiting the Suffolk Records Office to look at some of the old 19th-century admissions records from St Audry’s. On some of the pages, staff had clipped photographs of patients.

Juliet wanted to give these patients a presence in the collection at the Museum.  She used two of these images to create shadow figures, which she cut out of muslin and bonded onto a muslin panel.

Further inspiration was a comment made by a participant during one of the creative writing workshops.

Juliet made white labels and printed them with a variety of diagnoses and slang words connected with mental health.  Some of these were sourced from the admissions records, others more up to date.

This artwork aimed to stimulate a discussion around the use of labels.  She asked a series of questions, Should a label define who we are?  Who creates these labels and why?  Do we treat people differently if we know that they are labelled as having a mental illness?  Does a label such as ‘schizophrenic’ or ‘psychotic’ actually provide help to a person?  Do we know what that label means or do we just take a guess?  Does that label undermine the humanity of a person?  Do labels become our identity?  Are labels positive or negative?  Do we try to see the person behind the label?  Should labels become a thing of the past?

The artwork is seen and text reproduced in this report were done by Juliet Lockhart, Melissa, J.A.M., Richard and Fred.

Thanks go to Comic Relief for funding this project.