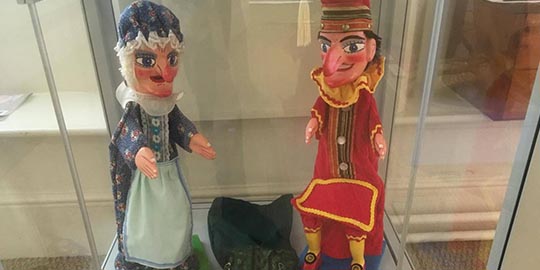 Our objects in the spotlight this month are the Punch and Judy puppets that have generously been loaned to the museum, for exhibition, by Batteys Punch. They are handcrafted hand puppets, and are good examples of the puppets that would have entertained many for over 300 years.

The idea of the Punch and Judy show originated in Italy. It comes from the Italian Pulcinella or Punchinello – a traditional puppet trickster character. (No relation to the Suffolk Punch horse!) It was first performed in England in 1662. The puppet shows follows the misadventures of the angry Punch, and a large cast of characters including his wife Judy, the crocodile, and the policeman.

Originally for adults because of the violent nature of the stories told, it was the Victorians that started to adapt the shows for children. For example, Punch, in the original story, had a mistress named Pretty Polly, but she was removed in later versions. The puppets that we are familiar with now became the main characters – Punch, Judy, the crocodile, and the policeman.

Today, Punch and Judy shows are seen as staples of any seaside visit, but can also be found at fayres, carnivals, and children’s parties with the distinctive red and white striped puppet theatre.

Life through the Eyes of East Anglian Artists is open until 31st March 2017 in Abbot’s Hall and is free to visit.