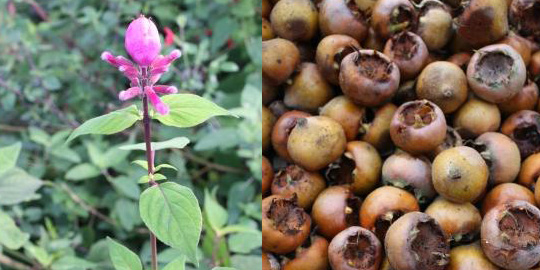 The first autumnal frosts glisten across the garden in the morning as plant growth slows to a stand-still. Watching the garden enter dormancy illustrates how dependent we and our crops are upon the weather and seasons. This dependence is not only on the warmth and light of spring and summer, but also for many plants from a cold spell during winter. These plants include many bulbs and fruit trees such as apples which require over 1000 hours of temperatures between 0C and 7C to initiate blossom in spring. While we’re busy trying to keep warm, it’s good to know that the cold weather is doing so much good.

Within the walled garden there is plenty of work to complete with next year in mind. A new triangular flower boarder has been created within the entrance to the garden. The turf has been lifted and stacked to make loam, an edging has been made and lots of compost incorporated. Howards Nursery has supplied many plants which have been planted alongside those which we have grown and those which have been donated.

They include; Iris sibirica ‘Flight of Butterflies’ a dainty iris with strongly veined blue and white falls. Calamintha nepeta ‘White Cloud’ which belongs to the mint family Lamiaceae; it is highly scented and a fantastic bee plant. Macleaya x kewensis ‘Flamingo’ is a dramatic plant, native to China and Japan, growing to 6’ tall with airy panicle flowers. I’m very happy to have included Gladiolus byzantinus the wonderful early magenta flowering native of the Mediterranean. Finally I have to mention Salvia involucrata a stunning vigorous plant which has a deep pink inflorescence; it’s not fully hardy so I’ve taken cuttings to overwinter in the greenhouse, just in case.

Several varieties of chicory are grown within the garden. The variety Brussels Whitloaf is a very coarse looking plant, sown in May for its large tap root. It was this which a group of volunteers within the garden were lifting recently. The leaves are cut off an inch above the crown and the lateral roots rubbed off. The tap root is shortened and they are then potted up closely together within a large pot. We covered these potted roots with upside down compost bags and stood them in the boiler pit within the potting shed. All of this work should pay dividends with beautiful tasty white ‘chicons’ produced in the depths of winter.

There is an interesting story of how a Belgium farmer, Jan Lammers, produced the first ‘chicons’ in 1830. It’s said that he stored chicory roots in his cellar intending to make a coffee substitute with them and on returning from the Belgian War of Independence, he discovered they had produced blanched white leaves, which were to become a delicacy known as ‘white gold’.

Within the grounds of Abbot’s Hall there is a wonderful range of trees, including several grand Beech trees (Fagus sylvatica), which throughout November have slowly turned golden in the low autumn light. There is also a Medlar tree (Mespilus germanica) tucked away in a quiet spot. This unusual tree bears attractive large white flowers in spring and fruit in autumn, for which it has been cultivated for over 3000 years. It is native to south western Asia and south eastern Europe. Once ripe, the fruit is ‘bletted’ which means it’s allowed to partially rot, becoming soft and to my mind like a good apple crumble!

Tools with a Mission is a fantastic charity which sends donated tools to countries around the world, enabling people to earn a livelihood and become self sufficient. They have very kindly provided a range of tools for the walled garden, which will help us continue to cultivate the garden for many years to come.