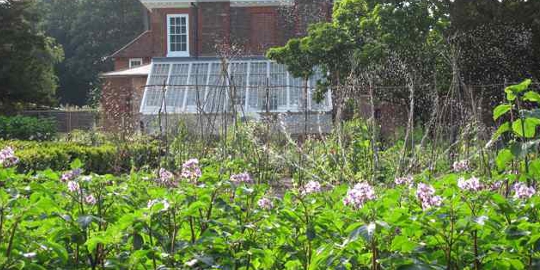 July has been a month of high temperatures and blues skies, with the Walled Garden looking like a mirage through a haze of sunshine. Keeping plants well-watered has been of the utmost importance this month, and despite giving this task priority, there have been some losses. The peas in particular seemed to be hit the hardest by the hot dry weather, resulting in a complete wipe-out of four rows.

Heavy physical work has been a struggle as the sheltered, sunny aspect of the garden helps create a stifling heat, considerably reducing productivity. This being said, the plants themselves have started to increase in production as beans, marrows and courgetteshave all started cropping. Lettuces, onions and potatoes are also ready for harvesting.

This is the first year that the Walled Garden has been put into full production, and I think it is fair to say that there is a certain amount of the unknown when it comes to predicting what will grow well within the garden and its soil, but also how all the produce will be used. The Osier Café at the museum has said that they would be interested in some salad vegetables as well as cut flowers for the café tables. They have also kindly offered the use of a stall outside the café from which we can sell produce.

Volunteers at the walled garden have helped stencil wooden crates, make labels and write signs for the stall, which commenced sales during the final week of July. Bunches of herbs, bags of beans, basil plants and big marrows are just some of the items on offer. Open Wednesdays and Fridays between 11am- 2pm, with all proceeds going to the Walled Garden’s maintenance and development.

Why not pay us a visit next time you are after some fresh, organic vegetables?

Demand for certain produce may inform plans for new plantings within the walled Garden this autumn. For instance, the popularity of cut flowers for the café has proven the need for a dedicated ‘cut flower border’. Traditionally the Walled Garden would have had an area devoted to the ornamental use of plants, supplying Abbot’s Hall with a ready supply of blooms throughout the year. The conservatory abutting the east elevation of the hall may well have been used (at least in part) as a foliage house – a haven for evergreens, exotics and winter flowering plants loved by the Victorians.

I am pleased to say there have been no shortage of bees and other pollinating insects in the garden this month. The herb bed in particular has been humming with activity and our companion planting of marigolds and borage between rows of vegetables has encouraged high numbers.  I have possibly spent a little too much time trying to get that perfect shot of a bee foraging, pantaloons bulging with pollen, as its lands perfectly on a flower head.