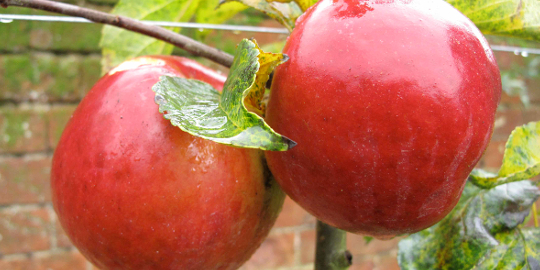 This beautiful dessert apple ‘Idared’ brought some Christmas cheer to the walled garden at Abbot’s Hall. Notable for its exceptional keeping qualities ‘Idared’s’ shiny red fruit is the best type of Christmas tree- edible and alive!

In December the espalier apple and pear trained fruit had their winter prune. Lead by fruit tree expert Duncan Gates, each tree was individually assessed by observing its type, vigour, the position of existing branches and location of growth buds. Having made these assessments confident clean cuts were made so that each tree can conform to this formal method of training which is not only highly decorative but also a highly productive way of growing fruit.

Duncan works at Audley End near Saffron Walden which grows more than 120 varieties of apples and 40 varieties of pears trained as espaliers, fans and single cordons in the kitchen garden. The fruit tree growing is exemplary, with many heritage varieties grown that you would struggle to see or find. Well worth a visit.

Another fruit tree that has caught attention on the Museum site (although not within the Walled garden) is Mespilus germanic, known as the Medlar tree. These strange-looking fruits grown by the Greeks and Romans were very popular during Victorian times. A pretty tree, the Medlar fruits from October but at this stage, it is not fully ripe. Medlars only become edible after being softened or ‘bletted’ by frost, or naturally in storage given sufficient time. Once left to ‘blet’ the skin rapidly takes a wrinkled texture and turns dark brown. The flavour is distinctive and tart if eaten raw, but having let them ‘blet’ (or more truthfully rot) Medlars make lovely jellies, desserts and wine, even if they do look like a cat’s bottom!

Also popular with the Victorian’s, Scorzonera hispanica, known as Scorzonera, and Tragopogon porrifolius, known as Salsify. These two root crops have been described as having a taste reminiscent of oysters, with Salsify having a flavour also crossed with asparagus. Both a parsnip-like shape the Scorzinera has black skin and white flesh which rusts very easily if not put into water immediately after cutting. These long toothy roots have forked a little in the soils at Abbot’s Hall but having made fritters out of them last week I can vouch that they are indeed very tasty vegetables and worthy of growing in any garden. In fact, following our zero germination rate of parsnip seed this year, these vegetables have been invaluable. No snips? What about Salsify!