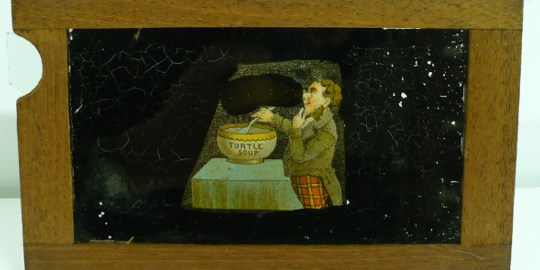 From the Museum Collection – Magic Lanterns

As a result of the Magic Lantern Society giving a well-received presentation at the Museum this week, our Collections trainees decided to investigate the possibility that there was a magic lantern within our collection. Imagine our excitement when they discovered that the Museum didn’t just have one lantern, but two!

The collections information showed that there should also be a collection of slides. An air of anticipation filled the office as we carefully opened the box, followed by squeals of delight and excitement as a wonderful selection of images awaited us.

The slides ranged from photographs of displayed insects to tourist shots of the Capitol in Washington DC and The Liberty Bell in Philadelphia to a series of images used to illustrate stories told to an audience. We think that one of these sets tells the story of Aladdin, whilst another depicts a regal Lion ‘King’ in a royal court of animals.

Some of the most interesting slides were those which used moving parts to animate the image. Steve particularly liked the slide demonstration of a lunar eclipse – brought to life at the turn of a handle so that a shadow passed over an image of the Moon. In contrast, our collections volunteer Jeannette was inspired by a slide with the cautionary tale of the hazards of turtle soup!

After looking at all the interesting slides ourselves, we would love to be able to share them at a display in the future. The museum is investigating how to bring this wonderful part of our collection out to be seen by more people.