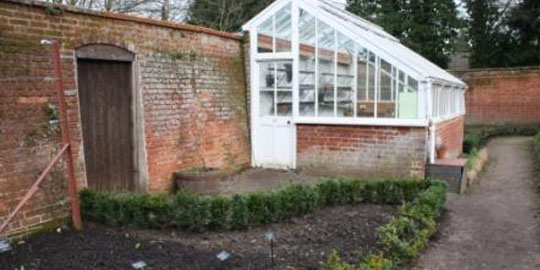 New growth is emerging as the garden begins to awaken in response to increasing day lengths and fractionally warmer temperatures. Stunning little Iris reticulata planted in the ‘triangle boarder’ have been flowering alone in earnest! We have sheltered in the greenhouse, creating a new border for tomatoes against the back wall; cleaning it down and sowing seeds during the cold wintery showers, but always eager to push on with work outside when the land is dry enough to work on.

Two sections of box (Buxus sempervirens) hedge have been replanted this winter. The decision was taken to remove these sections due to the presence of box blight; in fact two pathogenic fungi (Cylindrocladium buxicola(syn. Calonectria pseudonaviculata) and Pseudonectria bux) were found to be present by the R.H.S when we sent them samples in 2014. So with a group of volunteers, very keen to swing a pick axe, the plants were removed, all of the tiny leaves collected and the soil replaced with fresh soil to ensure that all resting spores were eradicated. Finally with a ‘human chain’ consisting of one person lifting plants, one transporting, one planting and one firming in and watering a new little hedge emerged; very satisfying!

The shallots have been planted out with the other overwintering Alliums; garlic and spring onions. The cultivar we are growing is the ubiquitous ‘Golden Gourmet’, a Dutch yellow shallot with good bolt resistance. We will select the best bulbs from the crop to replant the following year.

The seed potatoes have been neatly stood in trays with their rose end eyes upwards to start the process of ‘chitting’. This age old process is practiced to encourage the tubers to root quickly after planting, thus ensuring rapid establishment and earlier crops. We rotate the ‘families’ of vegetables within the garden, so will be lifting the last of the parsnips, scorzonera and celeriac during March to make way for planting this year’s potato crop.

We have made a worth while investment in building a new ‘closed case’ propagator for the greenhouse. This will enable us to produce a good number of seedlings with uniform emergence and to increase the scope of rooting soft wood and semi ripe cuttings throughout the season.