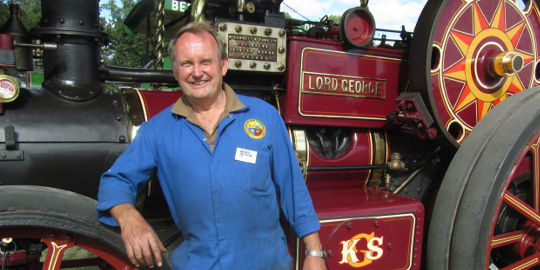 One of the key events in the Museum calendar is our annual Steam and Crafts Weekend. As part of the weekend, we run a Steam Driver Training course, which gives participants the incredible opportunity to drive a steam traction engine. Our guest blog comes from one of this year’s participants, who describes his experiences of this rather unique birthday treat.

‘The Friday afternoon drive from South Wales across to the Museum of East Anglian Life in Suffolk gave me plenty of time to think about what I had let myself in for. It all started when my wife and daughter had the great idea for my 60th birthday present of funding a traction engine driving experience for me. Although I was already the proud owner of a quarter-scale Burrell engine, I had often wondered what it would be like to be in control of its full-sized cousin.

We scoured the internet looking for something suitable. There were plenty of opportunities to drive railway steam engines, but that wasn’t for me. Much closer to the mark were experiences driving a traction engine through beautiful countryside, stopping at pubs along the way. National Traction Engine Trust (NTET) courses were also a possibility, but these seemed to involve much more long-term commitments. Finally, we found a weekend driving course at the Museum of East Anglian Life in Stowmarket, which looked just right.

Paul Palmer’s excellent instructions mentioned that there were hotels and B&B nearby but added that there was camping and caravanning on-site. Remembering very early morning scenes at the Great Dorset Steam Fair of people cleaning and firing up their engines, I decided to borrow my daughter’s tent and, for the first time in 20 years, try camping. The weather forecast looked good, and the instructions also mentioned on-site evening socials in the bar, which may have influenced my decision.

After pitching the tent and making a quick brew on the stove, I wandered around the site, watching engines arriving and being off-loaded and meeting fellow students, engine owners and museum staff along the way. We eventually converged in the barn (and the bar) for a pleasant evening chatting about the weekend ahead.

Next morning the course started at 9 a.m. with a safety briefing from Lisa Harris, where we also picked up our comprehensive student information packs. The timetable separated the 14 students, two to each of seven engines, with one of each pair un-sheeting, cleaning and lighting their engine and the other attending a series of talks about the innards and working of traction engines in general.

I was put to work by my instructor, Bruce, on a magnificent Garrett 4CD Showman’s engine “Lord George”. This engine was built in 1918 for the War Department, but by 1921 had been converted by Blooms of Debenham to showman’s form to be used with a Galloping Horse Roundabout by Fred Harris. In 1954 the engine was bought for preservation by the family of the current owner, Kevin Swann. Lord George, with its extensive brasswork, gave me plenty of experience with “Peek” brass polish, as well as the murkier aspects of emptying the ash and sweeping the firetubes.

Having lit the engine before we started oiling and polishing, Bruce soon taught me the basics of feeding the fire, avoiding the dreaded holes and adjusting the damper. It seemed like no time at all before the crackling sound of a full head of steam joined those evocative smells of hot oil and burning coal.  Bruce gave me a quick rehearsal in neutral with the regulator before showing me how to engage the gears and entrusting his engine to me for my first trundle around the museum grounds.

By the time my fellow student, Steve Tyler joined us from his theory sessions I had already managed a couple of circuits each as steersman and driver and was beginning to concern myself about fire and water levels. But Bruce reminded me that while miniature engines like mine require constant attention, full-size engines are rather less demanding (although the consequences of too much inattention don’t bear thinking about).

After a quick BBQ lunch, Steve and I spent a couple of hours getting comfortable with crewing the engine, under Bruce’s patient guidance and tutelage. This was so successful that we decided we’d be the first to have a go at the “playpen” obstacle course. This consisted of a series of chicanes, roped off parking bays, a trailer to be backed up to and small markers on which to stop each wheel of the engine in turn. The last test exercised the coordination between driver and steersman, particularly for the offside wheels which the driver can’t see.

The most difficult test for me was driving onto a simulated low-loader constructed from sleepers. By this time the engine was at full pressure and the regulator only seemed to have about half a millimetre of travel between full speed and stopped. Having driven an almost faultless test up to that point, I proceeded to drive Lord George straight through the (fortunately notional) cab of the low loader. Bang went my chances of winning the obstacle course competition!

All too soon it was time to leave the engines and get cleaned up for the evening social. Lord George with its canopy lights was to remain in steam to provide a backdrop for the event, so Bruce stood us down from the usual end of the day shut-down duties. The sun went down to a buzz of chatter about the day’s activities, fuelled from a fish and chip van ordered by the Museum staff and oiled with local real ale carefully researched at an earlier Museum event. Later on, there was a quiz, but since Steve and I, the “Two Musketeers Team”, were last on the scoreboard, the least said about this the better.

Sunday morning was the same arrangement as Saturday, so this time I attended the presentations while Steve prepared Lord George. Mark Groom and Kevin Swann between them kept us interested and amused with facts, concepts, ideas and anecdotes, illustrated from the Museum’s extensive stock of various types of steam engine. Kevin also gave us all a steam-related quiz to complete during the day. Steve and I successfully solved this puzzle, thereby restoring our self-respect from the night before.

Then it was back to the engines, all steamed up and sparkling from our fellow students’ attentions.  After a short drive on our original engines, the final activity of the weekend was called “bus stop”. All seven engines steamed around the museum twice, one circuit for steering and another for driving, before dropping that crew off at the bus stop and taking on another.  It was a real treat to experience the differences between showman engines, general-purpose engines, road traction engines and rollers. There was a wide range of makers too, with Burrell, Garrett, Aveling and Porter, Robey and Ruston Hornsby all represented.

At last, the weekend drew to a close, The engines were lined up with the students and their instructors in front for the course photo, speeches and the presentation of awards and certificates. All that was left was to strike the tent, pack up and wend my way homeward, exhausted but very happy.

We students were very lucky to have had such an experience and our thanks particularly go to Paul Palmer and Lisa Harris of the Museum staff for organising everything, to the volunteer marshalls who made sure we didn’t run over the museum visitors, and to the many engine owners and instructors who gave so freely of their time and expertise. A special vote of thanks, too, to the kind lady who kept up a continuous supply of hot tea.  I suspect that next year I will be joining the ranks of those for whom this course is not their first experience of driving traction engines at the Museum of East Anglian Life.