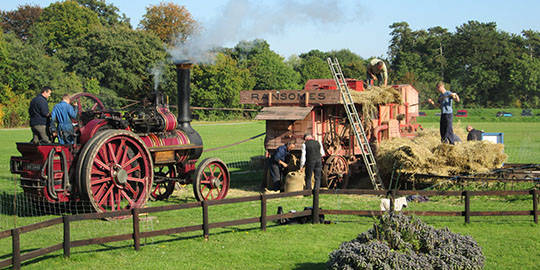 Today we see the modern combine ripping across the fields at great speed undertaking many tasks; most of them controlled more by computer than the person sitting in the drivers’ seat. Only forty years ago harvest often took nearly three months on an average sized farm, today if the weather is kind the whole process can take only two weeks covering over a thousand acres with huge machinery and few staff.

At the Museum of East Anglian Life we follow the farming practices of the years around the Second World War. The horse was reaching the end of its time as the main power source on the farm but the tractor was still low in power and sophistication so the steam traction engine still had a part to play particularly driving a belt on the biggest kit in use on farms, namely the thrashing tackle.

At the Museum a small team of enthusiasts farm some land in the traditional way, without the use of high powered machinery or modern chemicals. This year saw a bumper wheat harvest. The crop was sown last autumn and harvested this August using a Canadian built McCormick land-drive binder pulled by a 1948 Ferguson TEA20 tractor. The sheaves were stacked ready for the autumn thrashing.

In October the team assembled to thrash the crop before the winter sets in. The thrashing tackle included the Museum’s Burrell agricultural traction engine belted up to the Ransomes, Sims and Jefferies thrashing drum. Thrashing days always start with much hauling about of the drum and trailers full of wheat sheaves; there is then a bit of hanging about waiting to get steam up. Once the engine is manoeuvred into position and the belt put on then it is all-hands, a driver for the engine; someone keeping an eye on the sacks filling with grain; two pitchers forking sheaves from the stack onto the top of the drum; a loader on top of the drum cutting the strings and feeding the concave (the mouth in the top of the drum) and three people managing the mountains of thrashed straw coming from the back of the drum.

This year for the first time we used a baler to bale the straw. Previously we have packed the straw into large bags but this has been difficult to do and equally difficult to manage for museum staff using it for animal bedding. The baler is a sop to modernity but it was built in 1960 so it is still fixable with a spanner and far from the era when so much in life is controlled by electronics.

As the team cleaned down the machinery at the end of a perfect sunny day a small group sowed next year’s wheat crop ready for the whole process to start again. The harvest can be speeded up with modern technology but  crops still grow at their own pace.