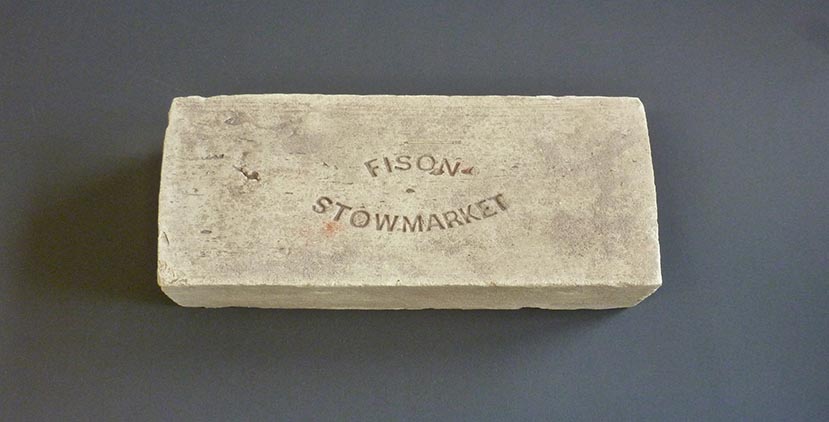 Suffolk Museums Object of the Year- The Feminist Brick

The hunt is on for the Suffolk Museums Object of the Year! This year’s theme is #HiddenHistories and we’ve nominated our feminist brick.

This brick may not seem very exciting at first, but this very simple object hides a fascinating story.

The clue is in its stamp: ‘FISON STOWMARKET’. The brick was produced in Stowmarket, now home to the Museum of East Anglian Life (MEAL). But it is linked to the museum by more than locality – there is a family connection.

Between 1858 and 1877, the Prentice family lived in Abbots Hall, the ‘big house’ of the estate which is now the museum. Catherine was the eldest daughter of the family, born in 1822. She married her cousin, James Fison, in 1848. James was a merchant, miller and brick maker. James died just four years later, leaving Catherine at the helm of the brickworks and other enterprises. She thus became a successful local business leader at a time when women were rarely seen in such roles.

Catherine became a brick and tar manufacturer, miller, wool merchant and maltster. In 1861, she employed 33 men and 17 boys. By 1871, this had expanded to 46 men, one clerk and eight boys. On her death in 1910, Catherine’s estate was valued at 979 pounds, 13 shillings and five pence, a substantial sum.

As this brick cannot be dated with any precision, we cannot say for certain whether it was produced under Catherine’s management. However, it provides a tangible link to the local business empire over which she presided.

This object’s story was uncovered through Search for the Stars, MEAL’s project creating an online collections catalogue and identifying new star objects through mass volunteering.

2018 marks the centenary of the 1918 Representation of the People Act, giving women the vote for the first time. With such a significant story that ties in with 100 years of Suffrage, we hope you’ll help us win Object of the Year 2018.