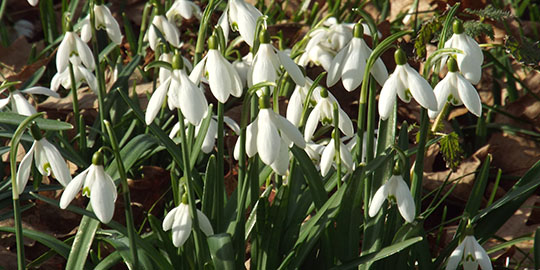 As Sinclair Lewis wrote “Winter is not a season, it's an occupation” and to this end work proceeds within the Walled Garden. In anticipation of capacious growth, as the seasons furiously push nature forward, winter is the time of preparation; to ‘fatten the land’, establish new plantings and start to sow the seeds of new crops.

Drifts of snowdrops (Galanthus nivalis) have pushed up through the cold soil in the wooded area to the north of the garden and throughout January have gloriously sparkled white, belying their diminutive nature and resistance to the coldest weather. It is amazing to think that snowdrops along with daffodils contain the active substance galantamine, which is now used in the treatment of Alzheimer’s disease.

We are fortunate in East Anglia to still be home to several seed companies. This is perhaps not surprising as the climate of Essex in particular is so favourable for the growing of vegetable seed crops. There is a long history of this occupation within the county and varieties with prefixes such as ‘Kelvedon’ are testimony to the breeding and selection work of these Essex seedsmen.

The museum’s Boby Building houses a wonderful enamel sign for ‘Suffolk Seed Stores’; it’s a reminder of a bygone era of small local horticultural businesses. The company was run by Fred Smith who owned stores in Princes Street in Ipswich and Church Street in Woodbridge and whose nursery fields were next to the Kingston playing fields in Woodbridge.

Several companies however do survive, one being Kings Seeds of Coggishall who still offer, and maintain seed stocks of a range of old cultivars. They have kindly offered a discount on seeds for the garden. Thompson and Morgan of Ipswich offer an excellent range of seeds including a ‘heritage catalogue’; they also specialise in new introductions and have generously provided free seeds for the garden.

Stored within a small box are the colours, scents and tastes of a garden.

The UN has declared 2015 the ‘International Year of Soils’, highlighting how healthy soils are the foundation for food, fuel, fibre and even medicine. I believe it is important that children have an opportunity to discover the wonders of both soil and plants. I hope that the garden provides that connection for all of the young visitors and school groups who point and question and hopefully find some amazement within the walls!

I would like to thank everyone who has supported the garden during 2014, through buying produce and plants; your decision to support us ensures that the garden flourishes.