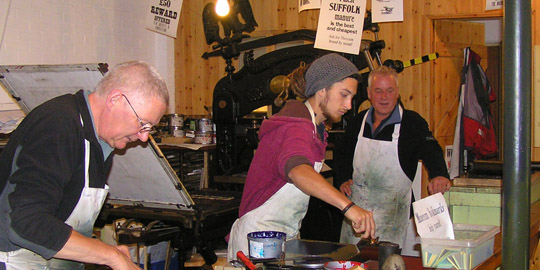 It has been said that to err is human but to really foul things up you need a computer.

This is well illustrated in proofreading, especially newspapers.

A Museum visitor told me that she used to be a proofreader for a popular regional daily paper; some years previous all the proofreaders had been made redundant as the computer could do it all – since then the number of typos and spelling mistakes has rocketed.

My particular favourite, amongst many, was the article that I was reading when I suddenly came across the following “a certain jet news says quoit” – I read it again, and again and after a few minutes the penny dropped; the writer of the article had actually written “a certain je ne sais quoi”, as the computer didn’t understand French it corrected the phrase to the nearest English equivalent and nobody had proofread it.

Proofreading is a skilled job, and it should be done by someone who hasn’t been involved in writing the article – in the Print Workshop at the Museum I always try and get someone from “outside” to read the proof before we print lots of copies; this doesn’t always work as it sometimes happens that no-one is around to ask and typos and spelling errors occasionally get past my eagle eye.

A case in point is a poster currently (July 2016) on display at the Museum with a spelling mistake.  By the time I spotted it I had printed the poster, handed them over to be put up, cleaned the type and put it away.  It was purely by chance that I spotted the mistake and by then it was too late – whoops!

The thing is, we see what we expect to see; if you’re the person who set the type and printed the poster you will not see what is printed but what you expect to be there – not always the same thing.