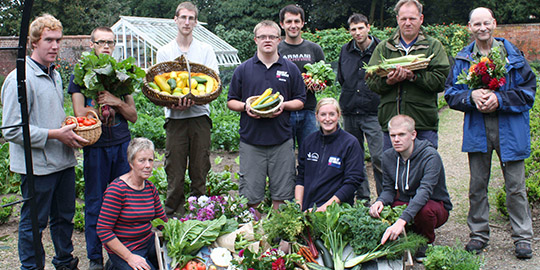 I am pleased to announce that this month we have been accepted into the National Garden Scheme (NGS) for 2015. The scheme supports nursing and caring charities throughout the UK by opening thousands of gardens, many of which are not normally open to the public. With a prestigious reputation, NGS puts gardens ‘on the map’, bringing them to the attention of enthusiasts and professionals alike. We are very excited to be opening our gates for this worthy cause on Sunday July 12th 2015, so make sure you have this date in your diary.

On the 14th September the Walled Garden ‘Dug for Victory’ as visitors got a a taste of the types of fruit and vegetables grown during the Second World War at our Countryside at War event. Children helped Francis and I dig heritage varieties of potatoes including ‘Highland Burgundy’ and ‘Shetland Black’. As these names suggest, both are dark-skinned varieties – which made it all the more interesting trying to spot them amongst the soil. Time will tell quite how many we missed as they re-sprout next year.

This lovely array of winter squash have been harvested this month. Heritage varieties ‘Turk’s Turban’ and the pear-shaped ‘Golden Hubbard’ can be seen here as well as the grey-skinned ‘Crown Prince’, which has great flavour. Cut from the vine leaving a 3 inch stem, these fruits have been left to cure in the warm, sunny greenhouse. Following this they have the potential to be stored in a dry cool place for months if necessary – although if they get past Halloween I will be amazed.

This may look like slave labour, but believe it or not autumn is a great time to establish new plantings. Focussing on the uncultivated bed closest to the conservatory, volunteers to the Walled Garden set to breaking the ground. Unfortunately we have had one of the driest Septembers on record, and this coupled with the years of ground compaction resulted in the need for pick axes and mattocks – hard work indeed. Having since incorporated lots of organic matter we hope to begin planting in October. Primarily an ornamental area, it will incorporate a bench as well as our plant stall. We aim to keep it herbaceous with as many long flowering plants as possible.

September also marks the end of my Heritage Garden traineeship at the Museum. For the last 18 months I have been fortunate enough to have played a key role in the restoration and re-invigoration of the plantings at Abbot’s Hall Walled Garden, working alongside a fantastic team of volunteers.  I hope they feel very proud of what has been achieved thus far. I will be very sad to leave but am happy in the knowledge that Francis, the next Heritage Garden Trainee, will continue to develop the garden with a keen eye and very capable hand.

Thank you to all those who have helped and supported me and the Walled Garden, I can honestly say it has been a fantastic and life-affirming experience.