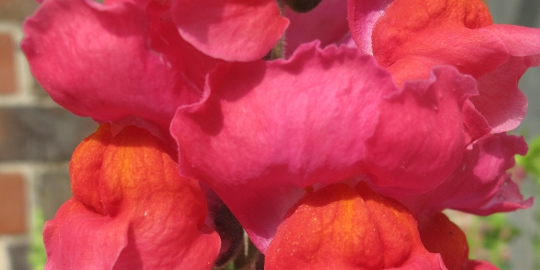 June kicked off with a beautiful open gardens day at Langham Hall Walled Garden, where I train two days a week as part of the ‘Skills for the Future’ program. Myself and two others served tea and cake on the lawn in front of the main house whilst visitors sauntered through the 3 ½ acre Georgian walled garden which holds highly productive areas of fruit and vegetables, a cutting border, herb bed, greenhouses, poly tunnels, a pretty summer house, ornamental border, grass tennis court and the national collection of Campanulas. It was a great success, and a chance to show off a beautiful setting most of which is not normally open to the public.

In the walled garden at Abbots Hall we have been busily planting out any remaining seedlings raised in the greenhouse. Peas, beans, Kale, Kohl Rabi and lots of salad crops have all gone out this month. Protecting some of these crops has proved challenging as we are practicing an organic approach within the garden, with minimal use of modern materials. Brassicas are protected from pigeons by making a framework of bent willow poles coppiced from the museum’s osier beds, which are then covered and pegged with black netting. To prevent cabbage root fly we are trying a Monty Don technique, that requires each plant to have a square cardboard collar fitted around the base of its stem. The idea is that the cabbage root fly, which would normally lay its eggs at the base of the plant, deposits instead onto the cardboard, these eggs then dry up and fail to hatch. The cardboard eventually decomposes.

A heritage variety of tomato named ‘Best of all’ is now occupying the freed up space in the green house. We are training the plants as cordons up strings and have started brewing comfrey tea – a foul smelling liquid tomato feed. This consists of masses of comfrey leaves stuffed into a bucket, soaked in water and allowed to stew for a few weeks making an oozing, smelly brown liquid which is then diluted at a ratio of 1:20 with water and fed to the plants.

From tomatoes to potatoes, the end of this month has been marked by our first potato harvest. Planting this particular batch was one of the first tasks I undertook back in April when I started my position as ‘Heritage Garden Intern’, so to now be able to enjoy the fruits of this labour holds particular resonance. Lets hope this is only just the beginning!

The variety is ‘Kestral’ which has lovely violet / purple markings that disappear when cooked. This colouration echoes the plants’ flower which I feel is often under appreciated – such a pretty papery, delicate bloom, sadly not visited by many bees or insects as these flowers do not produce nectar.