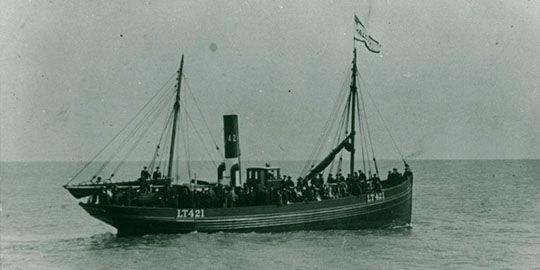 One of our Collections Trainees, Jake Stone, has been documenting items from our fishing collection. Find out what he discovered about some of our photos below:

The communities of East Anglia have long been shaped by their close relationship with the coast,with countless generations of fishermen braving the stormy North Sea to earn their living. In fact the East Anglian herring fishing industry can trace its roots all the way back to before the Norman’s arrived in 1066.

It was not until the 19th Century however that the East Anglian fishing industry really boomed, with every nook and cranny of many of its ports being given over to curing, pickling and packing herring.This explosion was largely down to the introduction of the railways; it gave an opportunity to fishermen and agents to deliver their catches to markets much more quickly than ever before.It was now possible for the very first time to land fish one morning and have the catch available in the fish market of Manchester or London by the next.

It is said that by the early 20th Century that Lowestoft harbour was so packed with fishing vessels that it was possible to cross the harbour without getting your feet wet. And in the record breaking year of 1913, upwards of 380,000 tons of herring were landed at the ports of Great Yarmouth and Lowestoft between September and December.

From the mid-1800s each September for 100 years, an army of Scotswomen, known as ‘The Herring-Lassies’ descended onthe fishing communities of East Anglia for around 12 weeks at a time. When Great Yarmouth’s herring industry was at its peak in the early 1900s, as many as 10,000 seasonal workers were welcomed into the town – of that number 6,000 were Scotswomen.

The herring-girls moved south following the fishing fleets, travelling from port to port, gutting, pickling and packing herring by the million as they went. They worked in teams of three. Two would gut the fish and the tallest girl – the one who could reach the bottom of the barrel with the most ease – would have the task of filling them. They received a small sum on engagement at the beginning of the season and were then paid per cran, or 28 stone weight, of fish packed in the barrels. It is claimed that they could gut up to sixty herring a minute – one every second!

It was often extremely gruelling work; with most of the girls working six days a week, often starting at 5.00am and only finishing when all the catch was gutted and packed, sometimes late into the night.When the packing finally did stop, the girls would yell “bottom tier”to summon the curer who would cast his critical eye over their work.

The herring industry finally collapsed in the 1960’s, due to over fishing, government red tape and soaring fuel prices. This marked the end for the herring-girls and their great migration; however they are still fondly remembered by many living in the region and their story has now firmly passed into local fishing legend.

Could you help us add to our knowledge concerning the fishing traditions of East Anglia? Please use the comments section below to tell us your stories.