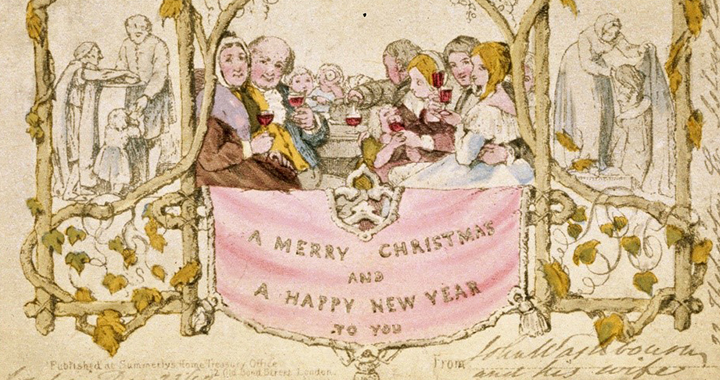 How do you contact your loved ones at Christmas time?

Christmas cards have been used as a way to send festive greetings for hundreds of years, but have you ever wondered where the tradition of sending Christmas cards originated from?

The first recorded use of “Merry Christmas” was in a Christmas letter sent in 1534[1].  But the custom of sending Christmas cards as we know them today started in the UK almost 300 years later. Henry Cole was a prominent civil-servant, educator, and inventor and is known to have sent the first Christmas card in 1843.[2]  Around this time, he worked at the Public Records Office, where he was instrumental in establishing the ‘penny post’[3]. The Uniform penny post made sending mail more accessible to the British population by setting a standard charge of one Penny.[4]

With so many letters to handwrite during the festive period, Cole turned to friend and artist John Calcott Horsley to design a greeting card, which was sold for a shilling apiece.[5] The two outer panels depicted scenes of charity, with food and clothing being given to the poor and the inner central panel showed the Cole family gathered around their Christmas feast raising their wine glasses to toast the health of the recipient.[6]

Horsley’s design featured a “To” and “From” section and space for the recipients and senders name to be written. Although Christmas cards proved an effective and timesaving way to greet loved ones at Christmas, they ‘were considered quite expensive at the time, and the custom of Christmas card sending didn’t really begin to take off until the mid-1850s’[8]

During the latter half of the 19th century, printing presses became more advanced which meant that Christmas cards could be more easily produced. This made them more accessible to the masses and they increase greatly in popularity through the 20th century.[9]

According to Royal Mail ‘sending Christmas cards is still the nation’s favourite way of spreading festive cheer. Almost 8 in 10 UK adults (77%) who celebrate Christmas say that sending cards are their favourite way of sending season’s greetings to family and friends – compared to saying it in person (62%), by text (34%) or by social media message (38%)’[10].

With modern technology brings many more instant forms of communication, but it’s good to see that the humble Christmas card is still holding strong!

Here are a few Christmas cards in our collection:

Figure 2 – A Christmas card with an illustration of Owls [11]