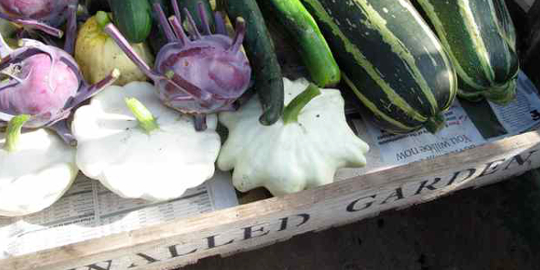 What an eventful month it has been, starting with my wedding at the beginning of August. Very much a home-made affair, we decided to cater for 100 guest ourselves, wherever possible using vegetables grown at one of the three gardens I currently work in; Abbot’s Hall, Langham Hall and my own kitchen garden at home. Salads featured heavily – one consisted of courgette, Broad Bean and mint, another was Carrot, Coriander and Cardamom, and lastly Kohlrabi and raw beet slaw. The Kohlrabi came from Abbot’s Hall walled garden and has been selling well on our produce stall outside the Osier Café. This sputnik shaped vegetable translates as ‘turnip cabbage’ – its mild, sweet flavour a great addition when grated into coleslaw. We have gone for the less common purple variety.

Another curiously-shaped vegetable we have been growing is the ‘Patty Pan’ Courgette, circa 1722. When eaten young, these nobbly saucer-shaped vegetables can be treated like a normal Courgette, but as they grow on are closer to a squash in texture and nutty flavour. They can be seen above alongside the purple Kohlrabi, marrows and the brilliantly named ‘Burpless Tasty Green’ cucumbers.

The beans in the walled garden are tremendous at the moment. Not only do they add structural interest and act as a great backdrop for other plants, they also keep on giving! We are growing several different heirloom varieties, two of which were passed onto us by the Ipswich Community Garden. Each have a distinctive look, the purple varieties being particularly attractive and having the added bonus of being easy to spot on the plant. This is a great attribute in a bean, as anyone who constantly harvesting knows its is all to easy to miss them as they hide amongst the foliage.

Here, Paul shows off a bumper bean haul using a beautiful trug, hand-made for the garden by one of our 3-month heritage skills trainees, Sheila.

Although we still have plenty more yet to harvest in the garden, bare stretches of earth are beginning to appear.  In an effort to both cover the soil (thus preventing weeds), as well as nourish it, we are beginning to apply green manures in the walled garden. These are plants solely grown for digging into the soil, improving its fertility and structure. So far we have broadcast sown winter tares (Vicia sativa) where the peas once stood and are now sowing mustard (Sinapsis alba) where potatoes have been dug. Green manure plants must be dug and chopped up with a spade, left for a few days to die down and then incorporated into the soil. This process is carried out before the plants flower. The winter tares will be over-wintered and the mustard left for six to eight weeks before being dug in. As well as all this we are also now sowing winter lettuce, spinach and spring cabbage.