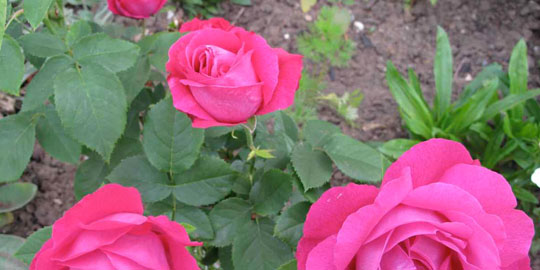 Planted at the beginning of the year, this Ulrich Brunner rose has looked stunning in recent weeks, its deep pink blooms demanding attention in the new rose border. A hybrid perpetual, it was registered in 1882 and evidence of its existence in the garden was found following metal-detectorist Bill Wyman’s visit in 2005, when he unearthed a number of old rose labels.

This month we started selling produce outside the Osier Cafe. On Wednesdays & Fridays we are now selling vegetables from 11 am – 3 pm and this year have seen the introduction of cut flowers.

Small posies of sweet peas and larger bunches of mixes including roses, cornflowers, lavender, sweet williams and dahlias have all been a big hit with visitors and staff at the museum. The cut flower border planted in spring is now a profusion of colour and contrasting blooms.

Back in the garden, we have been undertaking some restorative pruning. Since the 17th-century box hedge has been traditionally used to edge paths, stopping soil washing down and falling from the beds. It also has ornamental value, giving the garden an ordered, formal feel. In Susan Cambell’s ‘A History of the Kitchen Garden’ she quotes Charles Mackintosh, Scottish gardener and author having written in 1847 – “box-edging should not be allowed to exceed three inches in height, and two in breadth at the bottom, tapering towards a point”. He then goes on to say “Nothing looks worse than misshapen box-edging, particularly when allowed to attain a large size. The only real use of an edging of any kind is to separate the gravel of the walk from the mould in the border, and an edging of the above dimensions is sufficient for that purpose; larger ones only harbour vermin, and give the garden a neglected, careless appearance”. Although we are not striving for Mackintosh’s specific dimensions, we are reducing the height and width considerably, which over the years have gotten out of control. I certainly agree with Mackintosh’s observation on the vermin element. Box hedging also doubles up as a snail hotel, so to reduce the numbers of these critters is no bad thing.

Below, Nathan and Mihaly cut back the neglected box hedge.

Everything has been growing like mad this month and as a result, it is looking fantastic! With an increased interest in the garden, we have hosted two walk & talk sessions this month. Both were very well received and given their popularity, we hope to arrange more for August and September. Over 45 minutes we lead interested parties around the garden discussing the layout, plant choices, practices and history. If you are interested, keep an eye out for forthcoming talks advertised on the museum website.