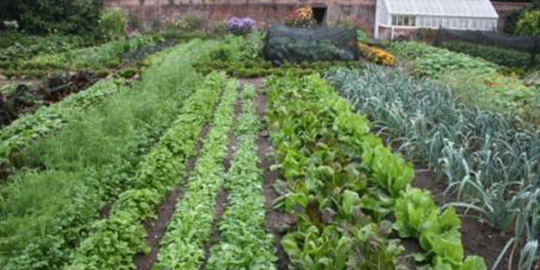 The Indian summer has finally been swept away by autumnal downpours and gales. The Walled Garden volunteers have swapped their sun-hats for waterproofs and we are thankful for every ray of sunshine to ‘bring on’ our late summer sown crops.

As we start the process of clearing the ground for green manures to be broadcast, it’s time to reflect on which crops have been successful in the garden this season and inevitably those which have been less so.

‘Scarlett Emperor’ runner beans which probably date from 1633 are unsurpassed for flavour and despite a dip in production during the scorching hot summer have yielded well up to the end of October.

‘Romanesco’ cauliflowers are a wonderful Italian type with a spiral like curd and distinctive sweet flavour; we couldn’t grow enough!

The pumpkins have been a favourite with the gardens younger visitors this year, particulally ‘Dill’s Atlantic Giant’ which weighed in at 30kgs.

Pumpkins curing in the glasshouse.

Under the grand magnolia at the entrance to the walled garden swathes of Nicotiana sylvestris have created a fanfare of white scented trumpet flowers. Having survived the depredations of marauding molluscs the Nicotiana sylvestris, meaning from the woodland, have thrived in this part of the garden, with dry soil conditions and dappled shade.

October brings with it a change in the produce from the garden as brassica and root crops begin to be harvested. This year, amongst the rows of vegetables, some forgotten root crops are waiting to be re-discovered by adventurous cooks. These include salsify, also known as the ‘oyster plant’ owing to its flavour when cooked. It was very popular with the Victorians although little grown now; the roots, leaves and flowers are all edible.

Scorzonera is another long rooted plant; in-fact so long it’s hard to lift from the ground intact. The trick to peeling the skin is to boil or steam it first; it can then be used in all manor of dishes.

Hamburg parsley originates from the Mediterranean region and has been used in central and eastern Europe since the sixteenth centaury. It is very good mashed with potato.

The Jerusalem artichoke which actually originates from North Eastern America is a member of the sunflower family Helianthus; it is excellent in soups and stews.

China rose radishes are a winter hardy variety brought to Europe by Jesuit missionaries in 1850, delicious grated on a winter salad.

As we finish picking the last of this seasons beans it’s time to sow the first of next years. Traditionally the Spanish variety of broad bean ‘Auqadulce Claudia’ dating from 1844 is sown on the 5th of November. Last but not least for this year the garlic will be planted. Breaking apart the bulbs selected from the crop lifted in July, the outside cloves will be planted and the central cloves taken home by the garden volunteers…vampires beware!