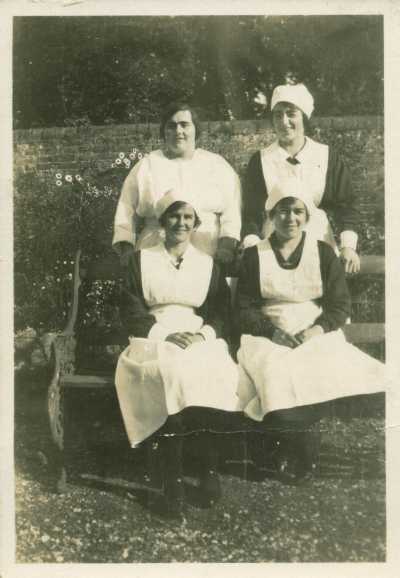 The Museum has a library located within Abbot’s Hall, where our volunteer librarian Jeannette can often be found hard at work. Available for drop in enquiries, or for pre-booked research sessions, the library has provided an environment where we can solve some of our most pressing questions about the history of Abbot’s Hall thanks to the help of visitors. One such mystery is the identity of servants in a picture that hangs inside Abbot’s Hall, one which recently Jeannette has made some brilliant progress on…

‘SUCCESS!! We have identified the servants on this photograph, which was taken in June 1928.

The two to the rear are Emily May Rice, later Wilding (right), was already known to us as the cook at Abbot’s Hall and later occupant of Crowe Street Cottages. We have since identified Alice James (to the left), thanks to her brother and son who visited the house. The two sitting have been identified only as Flo and Win.

We have also been given the name of another servant from around the same period, May Pleasance.

We are now looking to identify the four in this photograph

Can anyone help with any information about any of the above, in terms of names, when they worked here etc?

If you can help Jeannette in her mission to identify the servants, let us know by commenting, contacting library@eastanglianlife.org.uk, or by popping into Abbot’s Hall.

Research sessions in the library can be booked through enquiries@eastanglianlife.org.uk, or by phoning 01449 612229