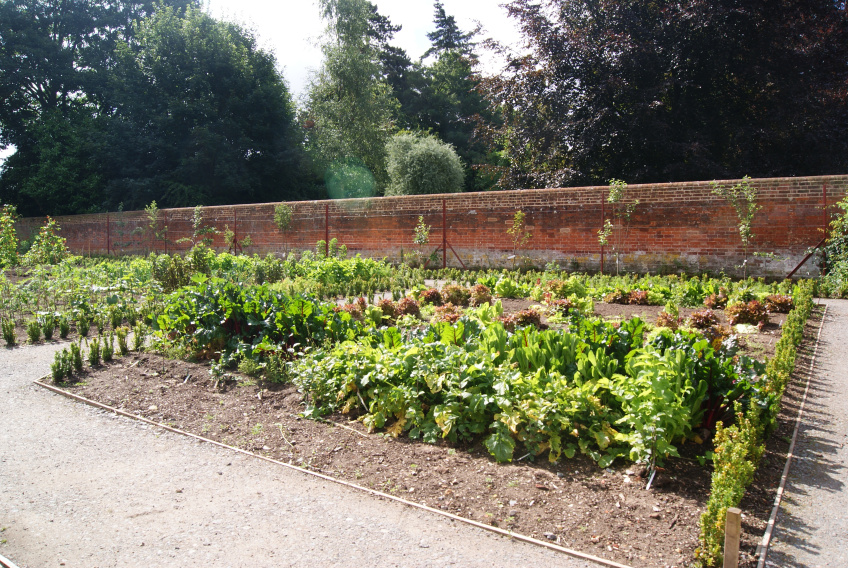 Home / Blog / A Year in the Life of the Walled Garden

A Year in the Life of the Walled Garden

When we opened Abbot’s Hall we also opened the Walled Garden that runs alongside it, a team of Volunteers work alongside staff to contribute to the upkeep of the garden, growing produce which is then sold to raise money to be reinvested into the garden. Our guest blog comes from volunteer Hugo Pickup, as he explains the history of the Walled Garden and how it has progressed this year.

The Walled Garden was originally used to grow both ornamental plants, like roses and fruit, and also vegetables, which would have found their way to the dining table of the residents of Abbot’s Hall. There is evidence to suggest that the area of the walled garden was originally laid out as part of a formal garden by Charles Blosse in the early 18th Century. The garden was enclosed throughout the 18th Century, initially as a barrier to the pastureland to the north.  It was finally completely enclosed and became a ‘walled garden’ during the early part of the 19th Century.

Given the lack of other pleasure gardens attached to the hall, it seems likely that it was initially used more for ornamental rather than practical purposes. John Hayward bought the property in 1877 and it seems that it was he who is responsible for adding the conservatory to the east and opening up the garden at its south-west corner to join an area of pleasure gardens. The layout of the paths, position of the summer house and extent of the walls we see today reflect those shown on the detailed map of 1885.

The Longe family purchased Abbot’s Hall in 1904 and it is likely that they were responsible for the addition of the glasshouse and potting shed to the north wall. Many of the extant trees surrounding the garden seem to have been planted in 1926.

Over the last 50 years the garden became derelict and fell into disrepair and it is only recently that a program of restoration and repair has helped transform the garden back to its former glory.

The Walled Garden is an ongoing project and is constantly being managed by the volunteers at the museum. It is also a working garden, growing all kinds of vegetables, salads and herbs throughout the year. Some of the plants grown in the garden can be seen on sale on the cart in the garden at certain time of the year.

This blog is to help keep record of all the changes within the garden and to keep you informed of them. It charts all the different changes, both to the plants grown and the work done by the volunteers to help bring the garden back to its former glory.

As the garden is constantly changing, it can sometimes look a bit of a mess or just a large area of earth, this blog will hopefully give you a better idea of what the garden will become again and show you that although it looks like nothing much is going on, there is always work to do.

If you would be interested in helping out with the garden or anything else at the museum then please get in contact and we will be happy to help.

Much of the ground was cleared around the boarders of the garden in readiness for planting in the spring.

Many of the beds were cultivated and weeded, ready to be planted. Flowers and beans were then planted around the garden and walls. The potatoes were dug up and the herb and salad plants were planted. The beans planted earlier were harvested along with the carrots and salad plants. Some of the plants grown in the garden also went on sale to the public for the first time.

The rest of the vegetables and salad plants were harvested in time before the weather turned. The beds were cultivated and dug over and many were weeded and plants cut back. Some cuttings were taken from the geraniums, herbs and bedding plants to be reused next year.

The carrots, which have been doing well this year were thinned out. Closhes have been installed over brassicas, mainly to protect from rabbits and deer that still invade the garden when the gates are left open. Winter beans were planted in the vegetable patch. Along the South Wall some daffodils were planted. The remaining bedding plants were dead headed and the perennials cut back. To keep the plants alive in the glass house, paraffin heaters have been burning when a hard frost was expected. Finally leaves and weeds were cleared off the path as well as other general tasks carried out by the volunteer team to keep the garden tidy.