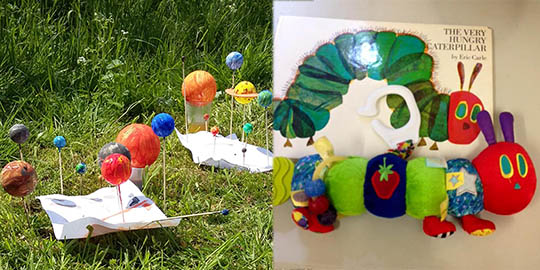 Home / Blog / A Week in the Life of the Learning Officer

A Week in the Life of the Learning Officer

Phew, what a week! For the first time the Museum hosted a School Science Week in partnership with Kinetic Adventure Centre. On Tuesday we had 125 children from two schools solving a crime. They donned Scenes of Crime suits, examined a crime scene, dusted for fingerprints and then took their own fingerprints. They also tried extracting DNA from strawberries and reading blood splatter across the grass of Abbot’s Hall back lawn. On Thursday almost 150 pupils experienced the wonders of space in a pop up planetarium and recreated our solar system in fruit and polystyrene. By Friday we were all ready for the Science Show and over 160 children had a go at firing rockets and had a go at mini experiments.

As well as Science Week I explored being a hungry caterpillar with our Toddler Time group. During Tiddlywinks Yoga we tried being small like an egg, growing in the sun, crawling like caterpillars and wrapping up in cocoons to emerge as beautiful butterflies.

Two evenings in the week were dedicated to our new Heritage Lottery Funded Young Roots project, Dining Through the Decades, working with local Guides from GirlGuiding UK. With one group we visited The MIX in Stowmarket and cooked amazing Victorian food using the Cabbages and Kings cafe kitchen, including ‘Rice Cakes’ (a bit like pancakes) and ‘Tomatoes Stuffed the French Way’. The other group started planning their big Georgian foodie event being held in July in the Museum marquee for their friends and families.

After learning about crime, space, science experiments, being a caterpillar, cooking Victorian food and finding about being a Georgian a cup of tea and a sit down were well deserved!

If you would like to know more about our learning offer, would like know about being a learning volunteer or have a group of young people who would like to take part in a Dining Through The Decades course please get in touch with Jo on 01449 618227 jo.rooks@eastanglianlife.org.uk