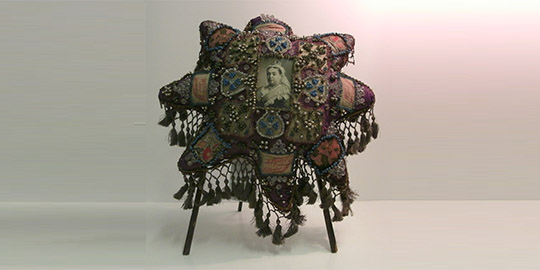 Every so often, a trip into the Museum stores or research for a forthcoming exhibition draws my attention to an object that I’ve never paid much attention too before. This happened recently as I delved into the role that needlework played during wartime, in preparation for an exhibition due to be shown at the Museum next year.

Rooting through the card index, I found some details about a pin cushion made by a soldier in the 1st World War which caught my eye. The card said that it was on display in the Peoples Peculiar room in Abbots Hall, so with the sun shining and the weather unseasonably warm I took a stroll to have a look.

On entering the room I had expected to find a small practical object used for sewing but how wrong could I be! Instead I found a large star shaped cushion made of silk with a cotton tassel edging. At least 45 cm’s across, it was highly decorated with pins and beads, with each one specially positioned as part of an intricate pattern.

Known as a ‘Sweetheart’ or ‘pinned’ cushion, I discovered that these beautiful items had their background in the 16th century when pins were handmade and very valuable. Being treasured objects the cushions were often made for significant events such as weddings, birthdays, christenings, etc, after which they were put on display.

During the 1st World War many soldiers were encouraged to take up needlepoint or embroidery as a way to pass the time while recuperating from war wounds, or as a form of occupational therapy. Sweetheart pin cushions were often made and sent home to loved ones as part of this.

The picture of Queen Victoria in the centre of our cushion suggests that it dates from an earlier war – possibly the Boer Wars of 1880-1 or 1899-1902. Queen Victoria herself enjoyed taking part in this type of work and encouraged soldiers to use quilting or needlepoint as a distraction when a long way from home.

Back at the Museum we know that our sweetheart pin cushion belonged to the donor’s mother. The name of a soldier’s unit was often included in the cushion but in our example, all we know is that it links with Aldershot. Maybe one day we’ll find out more!

If this object grabs your attention like it grabbed mine, you might be interested to learn that “Calm During the Storm – Wartime and Embroidery” is a touring exhibition from the Embroiderers Guild collection due to be displayed here in Abbot’s Hall from 17th January 2015 – 28th June 2015. Put it in your diary now – we look forward to seeing you there!