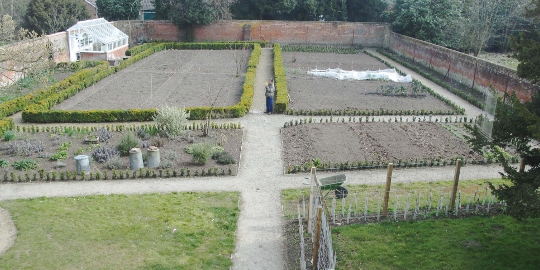 This is a first installment as I embark on a 12 month traineeship with ‘The Museum of East Anglian Life’. I have been appointed the new ‘Heritage Garden Intern’ and have been given the responsibility and honor of designing, planting and managing the walled garden, as well as the more formal areas surrounding Abbot’s Hall.

After a cold, long, harsh winter, my time at the museum has pleasantly coincided with an upturn in the weather. This is notoriously a busy month for any gardener, but with the continued cold temperatures into spring we now seem to be roughly one month behind where we might normally be in April in growing terms.

This is possibly a blessing in my case, as it gives me a chance to play ‘catch-up’ as I set about ordering seeds for the garden (A task one might undertake in the depths of winter to occupy and give hope to those dark days).

My garden brief; to layout the garden as per a Victorian/ Edwardian walled garden, including both vegetables and flowers. This theme should also be carried through to the plants in the garden, as heritage varieties are to be sourced and used wherever possible.

Of course the design must come first so I am devoting much of my spare time to researching walled gardens, as well as speaking to experts and enthusiasts.

Susan Cambell has been a huge source of information, and her book ‘A History of Kitchen Gardening’ particularly useful with layouts and detail on plant citing. Also I have been kindly leant ‘The Victorian Kitchen Garden’  DVD, a 12 episode television program filmed and screened in the late 1980’s following head gardener Harry Dodson as he re-creates a Victorian kitchen garden using the tools and techniques of the time, demonstrating the ingenuity, enterprise, expense and achievements of the Victorians. A fantastic program, and full of inspiration.

In the meantime, when the weather allows, the volunteers and I have been moving some of the old roses from the two main growing beds within the walled garden. A relic of a time when these areas were devoted to lawns and ornamental plants during the ‘Longe’ family years. I hope to include old roses within my design for the garden, so these still may have a role to play.

Andrew- Roses on the move